Michelangelo – Grand Maestro of the Renaissance 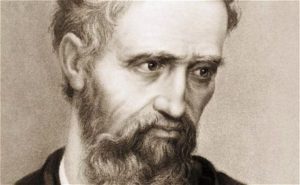 Michelangelo is the name that most commonly comes to mind first when having a conversation about the Renaissance. The “Grand Maestro” is best known for his work on the ceiling of the Sistine Chapel, but ironically painting was a secondary skill for him. Michelangelo was primarily a sculptor. He developed a passion for stonecutting at a young age while living near a marble quarry in Settignano.

Like many of the artists of the Renaissance, Michelangelo was trained in Florence under the patronage of Lorenzo De Medici. It was there that he learned to paint, though not in the traditional fashion. Art classes did not interest him, so he spent much of his time copying paintings in churches that were done by earlier masters. He also sculpted Madonna of the Steps and Battle of the Centaurs during these years.

Inside the Mind of the Master 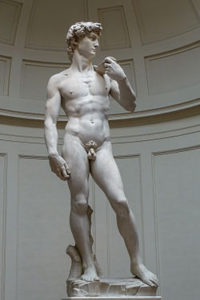 The two most acclaimed sculptures done by Michelangelo are Pieta, which currently resides at St. Peter’s Basilica, and David, which can be viewed at the Galleria dell’Accademia in Florence. Each of these was completed during tumultuous periods. Florence was going through the upheavals of Savonarola and Michelangelo had just endured a self-imposed exile to Venice and Bologna.

The French Ambassador, as a gift to the Pope, commissioned the statue of Pieta, which Michelangelo completed in 1499 AD. Vasari later described it as “a formless block of stone reduced to perfection.” If you visit St. Peter’s Basilica, closely observe the detail in Mary’s face, the slump of the shoulders, and the position of the body of Jesus. The artist accurately captures an image of pure despair, perhaps an expression of his own feelings during a tragic time in his life.

The statue of David, in sharp contrast to Pieta, is a work of triumph, not tragedy. In sculpting David, the Maestro captured the pure underlying beauty of the human spirit. By 1504 AD, when the statue was completed, Savonarola had been executed and Florence was controlled by the merchant guilds again. Botticelli and Leonardo Da Vinci, two of his rivals who were tasked with the placement of David after its completion, may have provided additional motivation.

The Sistine Chapel and the Last Judgment 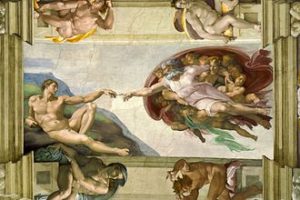 The artwork on the ceiling of the Sistine Chapel is the most magnificent work of the greatest master of the Renaissance. The project took four years (1508-1512 AD) and it was not the original design. Pope Julius II wanted scenes of the twelve apostles, but Michelangelo convinced him to surrender artistic license to him and went on to create an iconic masterpiece. Artists in every era since have found inspiration there.

The Maestro painted The Last Judgment twenty-five years after he completed the ceiling in the Sistine Chapel. The quality of the artwork is unquestionable, but its not what makes it special. The figures waiting to be judged are not clothed, making them all equal, commoner and nobleman alike. This “equality of man before God” concept was new, but would be seen frequently in the centuries to follow.