The year was 1929, and the date was February 11.  The event: The Lateran Treaty or Patti Lateranensi, and the birth of Vatican City, now a public holiday and a celebration in the city.  Although the treaty was signed on this date, Italian Parliament didn’t ratify until June 7, and the pacts did not become part of the Constitution of Italy until 1947.  This treaty, named for the Lateran Palace, where the treaty was signed, granted Vatican City independent state status.  At the time, the Italian government was led by Prime Minister Benito Mussolini.

You can visit Vatican City museums and the Colosseum, in recognition of the date, which is typically a quiet day; however, there are special masses.  Be aware that since it is a public holiday, many businesses will be closed on the 11th.  That said, most local churches will be serving hot community meals for anyone who would like to attend. 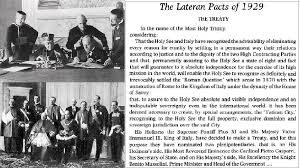 The treaty’s impact was significant:

·      It was the dictator, Mussolini who encouraged an alliance with the Vatican.  His goal was to eliminate all power from the Pope.

·      The exact opposite happened. Mussolini’s efforts ensured the Pope maintained his status and power in Vatican City, as well as around the rest of the world.

·      The Lateran Pact allowed the Vatican State to join the Universal Postal Union, a springboard to gain influence in international bodies.

·      The Pope may travel all around the world as a head of state and can speak at the United Nations, which is something typically reserved for elected officials or heads of state.

Another worthy way to spend the day in Rome is to take a train trip to the Gandolfo castle.  The railway, Albano Laziale provides a glorious trip from the Vatican to enjoy more gems of our countryside.

If you’d like to wrap up the day with a little fun and beauty, enjoying Rome at night on a Segway is a great opportunity.  A whole different perspective of our striking city under the stars.

An itinerary that includes Isola Tiberina, Portico di Ottavia, Piazza Campitelli, Piazza Margana, Crypta Balbi, Piazza Mattei (courtyard of Palazzo Mattei-Caetani), Piazza delle Cinque Scholae and Monte de’ Cenci is another way to take in more of our Roman history.  This “Jewish ghetto” of Rome was established as the result of a Papal decree in the summer of 1555.  It required the Roman Jewish community, who at the time numbered about 2,000, to live in the ghetto.  This guided tour will grant you insights into more of our Roman history.

How about an authentic Roman cooking lesson?  A Master Chef will disclose the culinary secrets behind creating classic Roman and Italian pasta dishes.  Learn how to prepare three kinds of traditional and fresh pasta.  This fun event would not be complete with tantalizing your taste buds with your very own creation.

If lighter fare is more to your liking, we also have a great wine bar and cheese tasting tour!   The bar is family owned and has been for the past 50 years.  It’s a good time with lots of incredible scenery to enjoy while you sip!