The Carnivale of Venice

Most people would not associate the Carnivale of Venice with Easter, but in Italy it is the traditional beginning of the Easter season. Held each year before Ash Wednesday, Carnivale kicks off a seven-week period when Italians get deeper in touch with their faith through fasting and religious observations. Think of the Carnivale festivals held throughout the country as one big party before the solemn season of Lent begins. Venice is where the most massive of these parties is held.

If you’re student looking for an early Spring Break getaway, Venice during Carnivale is where to go. The masks worn by revelers are emblematical of the pagan rituals of ancient Italy, before the time of Christ. You can see fashion shows, a Mask Parade at the Piazza San Marco, and the Wonderland Gallery at the palace Ca ‘Vendramin Calergi that overlooks the Grand Canal. Don’t miss any of these.

Gods and Monsters of Early Italy 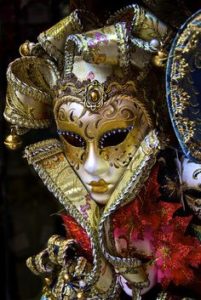 The Italy we know today is predominantly Catholic, but in ancient times the people believed in a pantheon of gods and goddesses, and in monsters. Carnivale masks you will see in Venice include the Minotaur, the satyr, the harpy, and Medusa. Many of these actually come from ancient Greek Mythology, but the Romans, as they did with so much of the culture in territories they conquered, assimilated them. Other masks you’ll see depict witches and demons of the underworld.

This colloquial mix of monsters somehow represents a passing from the older belief systems of a pagan country into the enlightenment of Christianity. Though subtle, the changeover can be felt as Carnivale winds down the day before Ash Wednesday. One of the final events, the “Svolo of Leon,” is a tribute to the winged lion of St. Mark, patron saint of Venice. This very Catholic ceremony marks the end of the pagan celebrations of the week and the eve of the upcoming season of Lent.

Understanding the Rise of Christianity 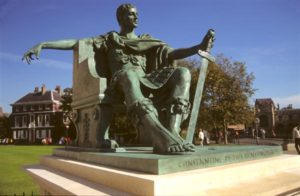 The Carnivale of Venice can provide the independent traveler a symbolic experience of the transition from paganism to Christianity, but how did the actual change happen? Over the next several weeks, during the Lenten season, Weekend in Italy will be covering the early days of Italian history, beginning in pre-Roman times and taking you right up to the present day of the modern Catholic Church.

What was the political situation in the Roman Empire that made it a given that Christ would be crucified? How did a predominantly pagan country make the transition to be a bastion of Christianity for the medieval world? When and how did Rome fall and why is it still a dominant force on the world stage today? We’ll be covering all of this and pointing out sites you can visit to see this history come alive. Be sure to check back with us every Monday and Thursday for more.