The 500th anniversary of Leonardo da Vinci’s death: our calendar

Weekend in Italy is ready to celebrate the 500th anniversary of Leonardo da Vinci’s death with a rich calendar of events including exhibitions and other special performances.

That’s a list of events related with Leonardo’s life that will take place in the most important Italian cities, like Turin, Milan, Venice and Florence. 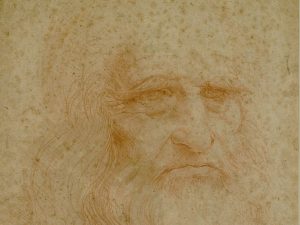 “An exhibition with over fifty works, illustrating Leonardo da Vinci’s studies in art and science, in the form of drawings. The visitor is taken through the collection of autograph works by Leonardo now in the Royal Library of Turin, which includes thirteen drawings purchased by King Charles Albert in 1840 and the famous Codex on the Flight of Birds, donated by Theodor Sabachnikov to King Humbert I in 1893. This is an outstanding set of works, dating from about 1488 to 1515, with a variety of subjects of different inspiration, but one that illustrates Leonardo’s activity from his youth to his full maturity.

To convey the significance, origin and particularity of Leonardo’s work, the creation of the Turin drawings is examined in relation to similar works by other artists, with the inclusion in the exhibition of works by other great masters from the Florentine Pollaiuolo to Bramante and Boltraffio in Lombardy, through to Michelangelo and Raphael.”

Probably Milan is the Italian city with the richest calendar of events dedicated to Leonardo da Vinci, who spent 17 years there.

From May 16th to January 12th, 2020 in the “Sala delle Armi” there will be the Museo virtuale della Milano di Leonardo, a multimedia journey to discover Leonardo’s places in Milan, as the Master saw them at his time. 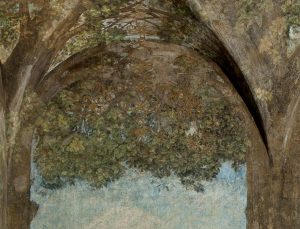 But the most important event will be the reopening of “Sala delle Asse” on May 16th,“which reappears to the public after a new phase of work, revealing the many portions of Leonardo’s preparatory design that emerged during the removal of the layers of lackluster from the walls. Through a scenic multimedia installation visitors will be guided to read the space, shifting the attention from the vault to the walls.”

The Ambrosiana Library in Milan will showcase its holdings of Leonardo’s works, which are among the most important in the world. These are the three different initiatives:

“The mysteries of the Codex Atlanticus. Leonardo at the Ambrosiana”presents, until March 19th, the drawings related to Milan, and until June 16th it will showcase Leonardo’s war machine projects and civil engineering studies.

“Leonardo in Francia. Disegni di epoca francese dal Codice Atlantico”(from June 18th to September 15th) is focused on the last years of Leonardo’s activity. The exhibition is composed bya selection of 23 sheets of architectural and hydraulic drawings realised by the Italian genius in France between 1516 and 1518, all traditionally related to the plans of the French King Francis I for a new royal residence.

The museum will host two new contemporary works of art dedicated to Leonardo; from June 14th to September 15th 2019 there will also be “comparison possible”between Lucio Fontana and Leonardo da Vinci, through a focus centred on the iconography of the horse, of “rampant horse” and of “horse and horseman”.

The first one is “Il meraviglioso mondo della natura”(The wonderful world of nature): from March 13th to July 14th 2019 and it’s dedicated to the relationship between Leonardo and the nature of sixteenth-century Lombardia.The exhibition is very impressive: Leonardo’s masterpieces will be related in a special way with the finds of the Natural History Museum of Milan.

Between May and August the “Studio Azzurro” installations dedicated to the genius of Leonardo will be exhibited to the public. Title of this event is ‘Leonardo enciclopedico contemporaneo”(Leonardo encyclopedic contemporary). 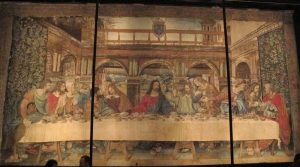 The last show is “La cena di Leonardo per Francesco I: un capolavoro in seta e argento”(Leonardo’s supper for Francesco I: a masterpiece in silk and silver); from October 7th to November 17th it will host the tapestry of the Vatican Museums which depicts the Leonardo’s Cenacolo (one of the earliest copies of the fresco – realised between 1505 and 1510, designed to meet the needs of the French court that wanted to bring with itself the image of a work that could not be transported). 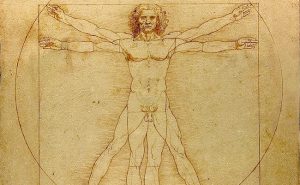 From April 19th to July 14t 2019 the Gallerie dell’Accademia will host the exhibition entitled “Leonardo da Vinci. L’uomo è modello del mondo” composed by the collection of 25 drawings belonging to the museum (including the famous “Uomo Vitruviano” – Vitruvian Man). From the Hermitage Museum will temporarily come also the “Madonna Litta”.

If you are on the footsteps of Leonardo that’s the city for you.

“To mark the 500th anniversary of Leonardo’s death, the Museo di Palazzo Vecchio is celebrating the unfinished masterpiece that is the Battle of Anghiari with an itinerary retracing its history through the various testimonials it houses, accompanying them for the occasion with special tools exploring the theme in greater depth. 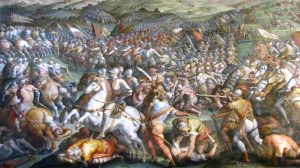 The Battle of Anghiari is Leonardo da Vinci’s best-known unfinished work. Praised by his contemporaries and copied by an entire generation of artists, it was intended to decorate one of the walls in the great hall of Palazzo Vecchio, which hosted the meetings of the Great Council of the Florentine Republic at the time and which is known today as the Salone dei Cinquecento.”

> Another exhibition entitled “Leonardo da Vinci e la botanica”has been announced; it should be hosted by the Santa Maria Novella Complex in the next September (to December)

Last but not least, take your family to the Leonardo Da Vinci Museum and admire the largest and most beautiful machines taken from Leonardo’s codes.