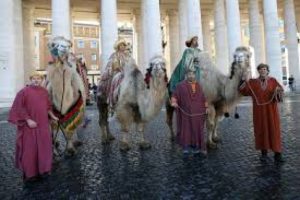 On January 6 of each year, we celebrate The Epiphany, also known as “Three King’s Day.” It is celebrated to recognize when the Three Wise Men (or Kings) visited Jesus, to bring their gifts of gold, frankincense, and myrrh. The date, 12 days after Christmas is celebrated in Italy as the end of the holiday season, and we exchange our gifts. The most famous celebration is of course at the Vatican; however, you may also visit the Plazza Navona. The Plazza will have a traditional merry go round for the kids, quaint gift stalls and incredible food!

And when in Rome, you know the saying, let’s hit some crazy, great, fun shops like Haute Couture, craft shops, and open market stalls!  And, the deal includes a personal shopper, what could be more fun?

The Vatican celebration includes a parade with 20 decorated horses, ancient costumes, La Befana, who passes through via della Conciliazione, behind the three kings, who are carrying gifts for the Pope. Pope Francis delivers a morning mass in commemoration of the Kings and their gifts. 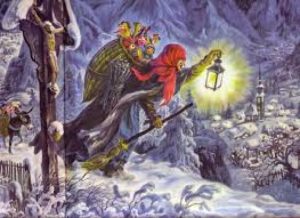 While at the Vatican, enjoy their gardens and historical museums for an incredible tour.

According to charming Italian folklore, La Befana, an old woman who wears a black shawl and flies on a broomstick visits the homes of children to leave candies and other sweets, along with small gifts on the Eve of Epiphany, January 5. Sound familiar?

The magical number of three makes another appearance here: the adoration of the Christ child, the wedding feast at Cana, and the Baptism of Christ.

There are other celebrations around Italy that include:
• Urbania, part of the Le Marche region, holds a festival for four days, from January 2 through the 6th where children can meet La Befana.
• Venice, part of the Veneto region is home to the Regatta delle Bafane, where men dress as La Befana and race boats on the Grand Canal. More on the Regatta coming in a few days!
• In the Abruzzo region, in Rivisondoli you can enjoy a reenactment of the Three Kings arriving at the manger. Participants wear costumes and join a parade in celebration of the event.
•The Calvacata dei Magi is in the Tuscan region in Florence. Starting at the Piti Palace and over the river to the Duomo, music lines the street as the Three Magi pass, followed by the Holy Family, bagpipes, and flag throwers, who wrap up the celebration with a performance in Plazza della  While you’re in Florence, why not do some more shopping by using one of two shuttles that also include some fantastic sightseeing too?
•In Milan, you can attend their Epiphany parade with Three Kings, who parade from the Duomo to the church of Sant’Eustorgio. The Diocesan-Museum-Of-Milan tour is a great addition to a wonderful day of celebration.  You can reach the museum from the Duomo or the church for great convenience. 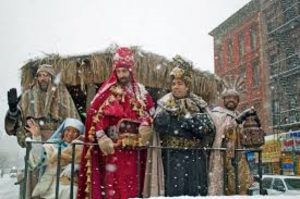 If you want to squeeze in some skiing while you’re in Milan, how do five days and four nights at a four-star hotel, near the bottom of the Alps, sound?  Sounds exciting to us!

Don’t be late; we want to see you at all these fun locations!  Book your trips today!  We’ll have some sweet treats waiting!