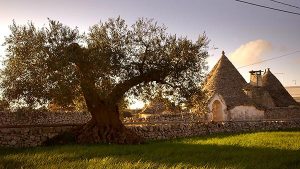 The Puglia region will awaken all five senses in any visitor. It is filled with ginormous olive trees, 500 miles of coastline, rustic stone walls and cone houses.  In this final episode of Season 1, Dream of Italy, Kathy McCabe takes us to several fun places to meet the residents and experts.

Book our tour, to view Lecce’s arts, and hand-made crafts and tour the city.  This location is in southern Italy in the “heel” of the boot with the Adriatic Sea to the east and the Ionian Sea to the south.  Lecce is also one of the most important cities in the region. 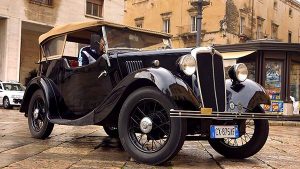 We first take off in a 1935 Morris Model 8 classic car ride to take in the sights and sounds of this lovely city.  From the historic center, we see that most of the buildings are made from the local limestone or Lecce stone.  Also known as “the Florence of the South”, Lecce’s coastline has brought both riches and dangers.  Its location has made it a prime source of several invasions, which ushered in danger, but the riches has allowed the area to boast of their beautiful Baroque art.  Another interesting benefit is that you will meet all kinds of people wandering about the town, from blue-eyed blondes to darker skins and differently textured hair.  The pace is slow and peaceful, but at night, everyone comes out for the nightly walk ritual of passeggiata.

Lecce is perhaps best known for its work with papier mache and Kathy takes us to the Riso Brothers workshop to observe their unique, completely hand-made characters.  Originally tasked with making traditional and revered religious symbols from lightweight materials for the many processions performed during the year, the brothers have now expanded to making peasant figures as well.  Their job begins with a wire skeleton, wrapped tightly with straw.  Then terracotta heads, hands, and feet are added and handmade, with no two heads being the same.  The clothing is then added and is the most eye-catching part of each production, carefully hand painted.  These creations are a “must-have” souvenir for every visitor!

As we have seen in almost every part of our iconic Italy, traditions abound, and Kathy learns the lively pizzica dance, the dance of our Grandfathers.  Many years ago, this was how men and women met and fell in love.  The dance involves intense eye contact and may also include a scarf, used to maneuver your partner into, shall we say, more romantic positions (wink, wink).  The dance is a traditional celebratory dance of the olive harvest.  If you are not already familiar with an ape car, please watch this vivacious Puglia video!

Our next stop is to meet “Mama” at the oil and wine school, away from the city in the lovely countryside.  Orecchiette is a variety of pasta typical of the Apulia region.  The unusual name comes from their shape, which resembles a small ear.  With the patience of any mother or teacher, “Mama” shows us how to make this tasty pasta treat and properly shape it for serving.  Fantastico!

A trullo (or trulli for more than one) is a traditional Apulian dry stone hut with a cone-shaped roof. This style of construction is specific to the Itria Valley, in the Murge area of the Italian region of Apulia.  After a failed invasion of this area, (remember the dangers were mentioned earlier), the marauders were too ashamed to return to their homeland.  This type of home was brought to the area by the Turkish Empire, (also known as Ottoman’s).  They would offer to work in exchange for a safe harbor and at times, they could also act as a private army if needed.  The very top of the cones hold a shape that is the builder’s signature and residents often paint symbols on the cones.  While the origin of the symbol painting is unclear, the symbols typically are related to religion, astrology or believed magic. 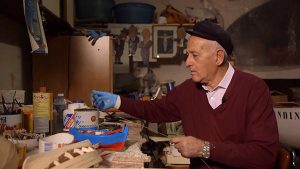 Later, in the lovely seaside town of Monopoli, a former pro cyclist, shares the harbor area and introduces us to a former fisherman, Ignazio, who now makes beautiful model boats in bright colors.  Why the bright colors?  It makes perfect sense!  Watch this episode to learn more, and don’t forget to grab a model boat for a great keepsake of your trip!

While Naples is about a four-hour trip from Lecce, it is well worth the journey to visit and see the many sights awaiting you there.  For example, the Royal Palace of Caserta is a former royal residence in Caserta, constructed for the Bourbon kings of Naples.  It is one of the largest palaces erected in Europe during the 18th century.  The palace is also a UNESCO site.

And on the topic of Bourbon, explore the underground of Naples’ Mount Echia, the “city beneath the city.”  The Bourbon Gallery has finally been opened to visitors, 150 years after the original project of King Ferdinand II of Bourbon.  The gallery was originally created as an underground viaduct to allow for the quick troop movements as well as transport of water and supplies from the Royal Palace to Via Morelli.

Another Naples must-see is the unforgettable long pink and grey facade of the Royal Palace, decorated with remarkable hanging gardens.

Any part of Italy will make you feel welcome and part of our Italian family.  Whether you are a foodie, an art connoisseur, an architect expert or a Master of History, there is an abundance of pleasures to enjoy with us in our magnificent Italy!

“Weekend in Italy is a proud sponsor of the PBS series, Dream of Italy, Season 2. Enter your zip code on this page for air dates and times on your local PBS station or view the entire series on DreamofItaly.com.”