Pisa, the Battle of the Bridge 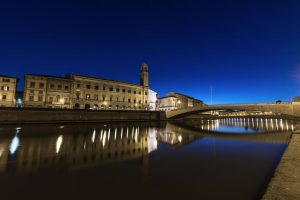 Frankly, amici (friends), fighting the battle of the bulge just stinks.  That said, the Battle of the Bridge is an ideal time to visit perfect Pisa!  Yet another annual celebration held on the last Sunday of June (June 24, 2018) is a night-long battle, enjoyed by participants, comrades in arms and observers.

So, here’s the scoop:

·      The game takes place at the center of Ponte di Mezzo, a bridge that crosses the Arno River.

·      Two teams are established from the surrounding neighborhoods and defined as north or south of the Arno.

·      The teams are battling to move an iron cart to the side of the bridge occupied by the enemy.

·      Both sides of the battle march along the Arno streets together along with a parade of more than 700 people, all dressed in 16th-century Spanish costumes.

Despite this being a single night of good-hearted fun, the preparation goes on all year long.

It would be cruel and criminal of us to invite you to Pisa’s traditional battle and not provide you with an option for visiting our Leaning Tower miracle.  Aside from the famous tilt that defies gravity, the Leaning Tower of the Cathedral of Pisa is a very unusual building.  The historical value of its design, as well as its peculiar location within the vast and equally unique Piazza dei Miracoligive, earns it a special place among Italy’s many noteworthy sites. 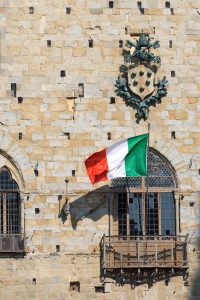 Another touring prospect is our Combo ticket valid for the museums and monuments of Pisa’s Cathedral Square including the Cathedral, Baptistery, Monumental Cemetery, Sinopias Museum, and the gorgeous Museo dell’Opera.

Back to the battle and its purpose.  Although the origin is a bit unclear, we believe it is tied to the time when Pisans trained in intense military battles in Piazza degli Anziani.  Warriors were dressed in armor carrying clubs and shields to compete against each other.  The event has changed over the years and rules have become more defined over centuries of history.  The iron cart rides on rails and once pushed onto the enemy side, their flag falls indicating a victory for the opposite team.  As we noted earlier, each team, from either north or south of the Arno, is made up of six smaller teams, called Magistrature.  The team with the most victories wins.

Another Pisa touring option is combined with a stop in lovely Lucca.  Here, we visit a winery near Lucca and explore the area with its ancient walls and picturesque historic city center.  We enjoy a traditional Tuscan lunch and admire the magnificent Piazza dei Miracoli in Pisa.  It is Pisan perfection!  Lucca is just a short 20-minute trip from Pisa.

Since Tuscany is only about an hour away, wouldn’t it be a shame not to take advantage of our Tuscan Wine Tour?  It’s a one-day trip to one of the most well-known wine locations in the world.  The only battles in this regal region are the ones for the very best glass of wine, and there are no enemies, and no losers!  Just relax and enjoy!

Get your trips booked early, you won’t want to miss this incredibly interesting battle in Pisa, or any of the opportunities in the area that will deliver you unforgettable pleasures and lifetime memories.

Può vincere la squadra migliore (may the best team win)!  And, if you are in attendance, you will be among the winners that day!