The Origins of Ash Wednesday 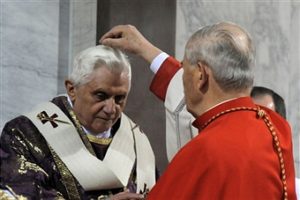 Why do Catholics celebrate Ash Wednesday? Where does this holiday come from? It’s the beginning of Lent when Catholics and other Christians line up at local churches to receive a symbol of their faith displayed upon their foreheads. According to historical records, this has been happening since the time of Pope Gregory the Great (590 – 604 AD). In modern times, the wearing of ashes on the head is considered a reminder of mortality and a sign of sorrow for sin.

The use of ashes is a symbol of penance in the Bible, referred to in 2 Samuel 13:19, which reads, “Tamar put ashes on her head and tore the ornate robe she was wearing.” It is also mentioned in the New Testament, though not directly. St. Paul, in one of his letters to the Romans, refers to placing the mark of the cross on the forehead as “delivering a Christian from slavery to sin and the devil, and making them a slave of righteousness and Christ.”

Ash Wednesday in Rome for Italians and Americans 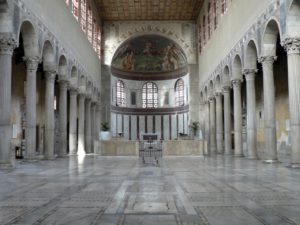 St. Paul was speaking of baptism, but the cross pattern of ashes used on Ash Wednesday is viewed as a renewal of the baptismal promise of forgiveness for man’s original sin. In Italy, and throughout the world, Lent is a season where Catholics reflect on the sacrifice Christ made for their sins, making that baptismal forgiveness possible. In Rome, all churches are open on Ash Wednesday to receive the faithful and provide them an opportunity to renew their baptismal vows.

Every year on Ash Wednesday, about thirty minutes before sunrise, hundreds of Americans and other English-speaking visitors converge on the Basilica of St. Sabina in Rome, the first station in the Roman Station Church Pilgrimage of Rome. This well-attended pilgrimage lasts throughout the Lenten season, with daily masses at different Roman Catholic churches. Most masses are at 7:00 AM, but the Ash Wednesday mass at St. Sabina’s begins at 6:45.

Ash Wednesday at the Duomo in Florence

For a truly stunning Catholic experience, travel to Florence on Ash Wednesday and attend mass at the Cathedral of Santa Maria del Fiore, the famous “Duomo of Firenze.” While you’re there, be sure to check out the famous artwork from masters of the Renaissance and climb to the North Side Terrace, where you’ll be treated to a panoramic view of the city and surrounding area. It’s a wonderful place to be closer to God while seeing all that man has created in this picturesque city.

If you’re short on time or not able to attend mass, there are still opportunities to view certain areas in and around the cathedral. Weekend in Italy offers exclusive tickets for climbing Brunelleschi’s Dome, touring Giotto’s Bell Tower, or taking a guided tour of Women’s Gallery of the Baptistery. You can book each of these twenty-four hours in advance to guarantee entry, even on Ash Wednesday.