Orange-Throwing Battle of the Carnevale in Ivrea 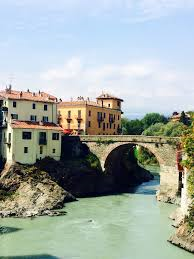 What is orange, weighs about 500,000 pounds, flies, has nine teams, includes an evil Marquis, rape, lives for only three days, leads to being black and blue, and makes things a little messy?  You’ll have to be in Ivrea, between February 15 and 17 to learn more.  Just north of Turin, Ivrea is considered the heart of the Canavese.  It is a charming area surrounded by five gorgeous lakes.

We’ll get back to our riddle shortly; however, in the interim, a great way to enjoy this lovely area, in addition to the iconic Italian cuisine, is to spend four nights in a fabulous four-star hotel.  Partake of characteristic mouthwatering cured meats, Alpine pasture cheeses, Capònet – rolls of Savoy cabbage with meat, stuffed onions with amaretto, Bagna Caòda – the tasty anchovy sauce served as a dip for crudités, Ajucche – wild herbs soup served with bread and so much more!

More information about our riddle: legend tells us that the Marquis Raineri di Biandrate attempted to rape a young woman (the miller’s daughter) in the village and in self-defense, she beheaded him.  The townspeople revolted and stormed the palace of the Marquis, and it burned to the ground.  The answer to our riddle includes battles lines loosely drawn between “commoner” and “royalty” lines.  One group has protective armor (they are on carts), the other does not (and are on the street).  Very interesting, eh?!

Speaking of palaces, if you haven’t toured the Royal Palace of Venaria and the lovely gardens, you have missed this beautiful Baroque style creation.  Learn the art and history behind the “house of Savoy.”  The site was placed on the UNESCO World Heritage Site list in 1997, renovated and opened to the public in 2007.  Please don’t be this close to Turin and not enjoy this delightful tour through history.

Discover more Turin history with a tour of the city, plus a trip to the engaging Egyptian Museum.  An incredible four-hour tour that also includes the Royal Palace, plus Palazzo Madama, the Church of San Lorenzo, the Cathedral and the Roman Quadrilateral.  Not to mention, passing under the awesome arcades full of antique shops and cafes.  The Egyptian Museum is the second largest in the world, after Cairo’s in Egypt for its outstanding collection of mummies, statues, artifacts, and exhibits.

Another of our favorite tours also includes the Palazzo Madama, and the Museum of Ancient Art.  The Palazzo Madama is one of the most monumental buildings in Piedmont, and it is home to the Museum of Ancient Art.  Collections at the museum, number over 70,000 exhibits dating to the Middle Ages, as well as the Baroque period.  Ceramics, sculptures, paintings, gold, silver and delicate porcelain, and centuries of both European and Italian masterpieces await!

So, finally, we know you’ve figured out this is all about the Battle of the Oranges in Ivrea.  Is there anything else you should know before attending this war?  YES!  If you’re not a participant in the war, be sure to wear a red, floppy hat!  And no throwing at the four-legged animals, please!  What about that riddle:

·      The nine teams are separated by those on carts and those on the streets.

·      Black and blue?  Expect a few cuts and bruises from the flying orange weapons!