Italy Epiphany Celebrations on the Twelfth Day of Christmas 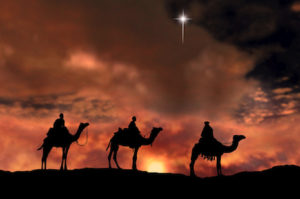 The tradition of giving gifts for Christmas actually comes from events that happened on the Epiphany, twelve days after Christmas. It was on the Epiphany that the Magi, three wise men who traveled a great distance, arrived at the manger where the baby Jesus lay and offered gifts of gold, frankincense, and myrrh. Children in America hear this story each holiday season and regard it as just another chapter in the “legend” of Christmas. In Italy, Epiphany is a major holiday.

If you’re traveling during the Christmas season, remember that Italy is a Catholic country. Rome, home of the Vatican and the Papacy, directs and cultivates Italy’s national faith. Consequently, religion is central to the culture there, so most national holidays are also church holidays. Epiphany, which happens on January 6, falls in this category.

The Legend of Befana in Veneto 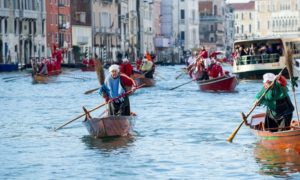 In many regions of Italy, Epiphany is closely connected with the legend of la Befana, the old woman with the broken shoes who comes by night with gifts, mainly sweets for children. Similar to the story of Santa Claus, la Befana arrives on January 5 (by broomstick) and is considered the personification of the old year giving way to the new. In certain northern parts of Veneto, the legend of la Befana is celebrated with a bonfire called a “panevin,” which is said to erase the negative thoughts and events of the old year.

One of the more spectacular celebrations of the Epiphany can be found in Venice. The Regatta della Bafane is held every January 6 on the Grand Canal. This unusual regatta, organized by the Cannotieri Bucintoto, a rowing club founded in 1882, is a race between five males over the age of 55, all dressed as La Befana. Each of these brave souls, to the delight of massive crowds, rows a single-oared Mascarete boat from Pallazzo Bilbo at San Toma to the Rialto Bridge.

Epiphany in Firenze and Palermo 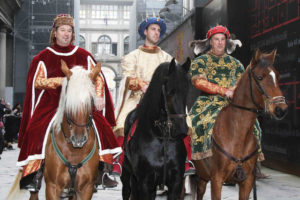 In the Firenze Region, the burning of Befana puppets, sometimes on a grand scale, commemorates the legend of la Befana. In Faenza, they celebrate the Nott de Biso, a festival that climaxes with the burning of a massive puppet symbolizing all the misfortunes of the past year. In Florence, locals go for a more extravagant approach. The Cavalcade of the Magi is a procession on horseback winding through the streets of the old city to Piazza della Signoria. Riders and pedestrians are dressed in Renaissance costumes and wave colorful flags.

Sicilians take a more solemn and symbolic approach to Epiphany. In Palermo, “The Old One” (A Vecchia) rides on the back of a donkey from the Cave of Grattara to the city Centre, where he distributes gifts to children. As part of the ceremony, the locals also hold a “trial” to pass judgment on all the events of the past year.

Europeans have a different outlook on gift giving than Americans do. Italians are raised to put extensive thought and consideration into the process. Here are a few tips for you if you’re planning on doing any gift giving in Italy this year:

If you’re looking for the perfect gift, please visit our online shop.