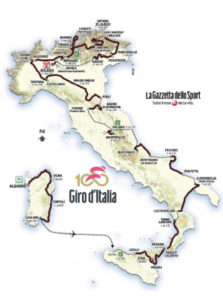 Most people around the world are familiar with the Tour de France, regardless of their familiarity with the world of competitive cycling. But can you name the other two extended three-week intensive cycling races that comprise the Grand Tour? The Vuelta a España and the Giro D’Italia, held in Spain and Italy respectively are two more multi-stage cycling races that give international prestige and athletic glory to the winner.

The Giro D’Italia was first held in 1909 and has run continuously since that year, with the exception of the years during both World Wars. The race was first started as a marketing tactic by La Gazzetta dello Sport, an early 20th century publication. The race has, however, gained steadily in acumen and is now considered among the world’s most intense bike races.

The course, which takes three weeks to complete, includes 21 stages that are between 100-300 kilometers apiece. In its entirety, the course covers the majority of the country, from the northern alps, through Sicily, and even including a flight and course on Sardinia. Although the route has been known to vary slightly from year to year, it always contains similar challenges and passes certain iconic landmarks.

This is excellent news for the May and June visitors to Italy as it will be easy to catch a piece of the action without going terribly out of your way. This year’s race begins on May 5th, in the Sardinian town of Alghero, nestled in the northwest corner of the island. The race closes on May 28th, in Milan with the shortest stage of the entire tour, a mere 29 kilometers of intense northern mountain passes. 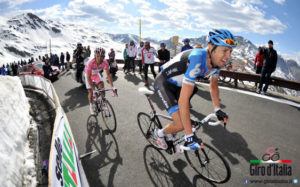 For those planning on passing through Milan at the end of May, there are sure to be special events to celebrate the end of the race. This also comes with the occasional road or business closure. Looking to delve a little deeper into Milan, a Grand Tour makes an excellent choice that will both offer you the best views of the city and skillfully navigate the crowds and closures that are sure to occur. If you prefer to be more in the thick of the crowds, a walking tour of the city will offer ample opportunity to mingle with thousands of cycling enthusiasts in Milan for the culmination of the race.

Planning to be a bit more centrally located? The race will pass through Florence mid month and will make an excellent opportunity to catch a bit of the festivities. A great way to get to know Florence and get in the thick of the activities while maintaining some distance is a boat ride on the Ano, which flows right through the city center. Again, if you’re looking to get a bit deeper into the action, opt for a guided walking tour that’ll get you up close and personal with the course and provide an interesting local perspective at the same time.

Regardless of which stage you catch up with the race at, you’re sure to understand the undeniable energy coursing through the country at this time of year. Not only is the weather beautiful and the locals energized, but the entire race takes place with the incredible Italian countryside and city centers as its ever changing backdrop.