Giotto and his masterpieces in Florence

Giotto was one of the biggest artists of history, and his genius is known by everyone, but we have very few informations about the biography of this famed artist.

According to the testimony of Giorgio Vasari, Giotto was a shepherd boy, a merry and intelligent child who was loved by all who knew him. He was discovered by the great Florentine painter Cimabue who decided to take the young artist in his workshop as an apprentice.

There is a famous story about Giotto that says a lot about him and his personality: one day the Pope sent him a messenger, asking  to realise and send a drawing to demonstrate his skill. It’s said that Giotto drew, in red paint, a circle so perfect that it seemed as though it was drawn using a compass.

His earliest works were for the Dominicans at Santa Maria Novella (Florence). These include a fresco of the “Annunciation” (Annunciazione) and the enormous suspended Crucifix, dated around 1290. 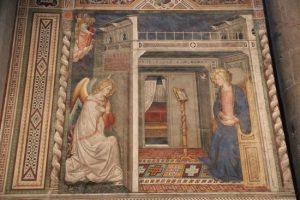 During the visit at Santa Maria Novella it’s given the chance to admire the fascinating painting of the cross that was put back at the center of the Basilica. Highlighting the theme of passion it is inspired by the Franciscan school of the “patient Christ.” It is the image of Christ’s body caught in the instant of abandoning life symbolized by the blood gushing from his wounds. Here, the extraordinary beauty lies in the realism of the model that is no longer idealized as in Byzantine art, but true to nature.

According to Lorenzo Ghiberti, Giotto also painted four different chapels for four different Florentine families in the church of Santa Croce. Today it’s possible to admire his works at the Basilica of Santa Croce, also known as the Temple of the Italian Glories, as many important artists, writers and scientists, including Michelangelo Buonarroti, Galileo Galilei, Gioacchino Rossini, Ugo Foscolo and Leon Battista Alberti are buried here. 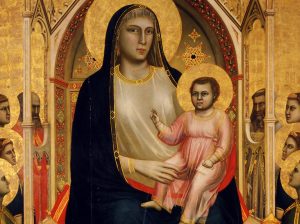 One of Giotto’s masterpiece entitled “Maestà di Ognissanti”, painted in 1311 and now located in the Uffizi Gallery in Florence. Once here visitors are allowed to admire his painting and one of the most beautiful galleries in the world. In fact, they will have the opportunity to follow the development of middle European painting from the late Middle Ages through the Renaissance and Baroque into the 18th century, admiring some of the most renowned works by Cimabue, Giotto, Masaccio, Botticelli, Leonardo da Vinci, Michelangelo, Raphael and many others.