Venice took a sad and heavy hit by the plague between 1575 and 1577, killing about 50,000 individuals, which at the time represented about one-third of the population.  In 1576, Doge Alvise Mocenigo promised God he would build a large church in exchange for God ending the plague.  The Doge held true to his promise and built a wooden church in just two days.  He also installed a bridge across the Giudecca canal for others to reach the church.  The little wooden church was eventually replaced by the ravishingly beautiful Redentore Church.

On the weekend of July 14 and 15, plan to be in Venice for this festival celebrating the demise of the 16th-century disastrous illness.  It is the only time the bridge between Zattera and the church is used.  This vivacious Venice event is over 400 years old and a treasured weekend delight for all!

Acquaint yourself with vibrant Venice on our wonderful walking tour of this unique and highly valued location!

A tradition that we enjoy most on this occasion is heading to St. Mark’s Bay at sunset to see Venetian boats and a fabulous fireworks display.  Or, if you prefer, a trip to Lido Island to watch the sunrise is also most pleasant.  There are no wrong answers here amici (friends)!

If you’d like to take a ride on your own personal gondola, including a serenade and dinner, you and your mate will never forget the experience!

Perhaps you have an aspiration to become a rower?  We can help there too!  Learn to row like a gondolier with us!  Fun and great exercise!

You will also enjoy joining us on a guided tour of St. Mark’s, and the Golden Basilica.

Saint Mark’s Basilica is the Patriarchal Cathedral Basilica of Venice and the seat of the Roman Catholic Archdiocese of Venice.  It is the city’s most famous and most visited church and a prime example of the Byzantine style architecture.  Because of its rich design and gilded mosaics, the church is often simply referred to as “the Golden Basilica.”  With more than 4,000 feet of magnificent mosaics covered in rubies, emeralds, marble, and gold, this treasure is a jewelry box filled with priceless gems.  The first church was built to celebrate the arrival of the body of Saint Mark in Venice in 82; however, it was cleverly stolen from Alexandria by Venetian merchants.  The second building after a fire was erected in 976, after which the Basilica was rebuilt entirely and completed in 1096.  The Basilica of Saint Mark was originally the Doge’s private place of worship.  Until 1807, the church of San Pietro di Castello was the seat of the Archdiocese and the city’s official cathedral. 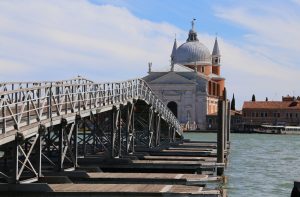 As we mentioned earlier, the weekend of the Festa del Redentore is the only time that Giudecca is connected to the rest of Venice.  This used to be via a bridge of barges, but it is now via a pontoon bridge made of 16 parts.  The bridge is 330-meters-long and 3.60 meters wide.  It is put just above the water, except in the middle where small boats can pass underneath.  Walking on the bridge at the same level as the church gives you a great opportunity to admire its beautiful façade.  Put this festival on your bucket list, it only happens once a year and you can check it off as done, at the same time you add the event!

It’s a wonderful opportunity to gain insights into our history and traditions while having a great time with family and friends!