Conspiracy and the Man in the Iron Mask

Mystery and intrigue are two of our favorite words, and there is no better way to get both than with The Man in the Iron Mask re-enactment in Pineolo,  a small hilltop village in the north of Italy near the city of Turin.

The Man in the Iron Mask is one of the oldest mysteries to still intrigue people around the world.  Over the past few centuries, the story of the mystery man has been depicted in both literature and film, with Leonardo DiCaprio most famously portraying the masked prisoner.  As the story goes, King Louis XIV held a prisoner for about 34 years, in several towns throughout France and Italy during the 1600s, always hiding his identity, even from his caretakers.  The jailers were with him for his entire imprisonment period with no changes in personnel to limit exposure to the masked man, who earned his moniker from his ever-present metal mask.  Although the actual material of the facial covering is often disputed as a mask, a cloth, and a velvet sheath.  There are several theories for why the man’s face was continually ensconced.  Perhaps he was a dignitary too prominent for beheading, or a twin to the king himself.  Although we may never know the stranger’s identity, thousands still speculate each year and celebrate the eternal mystery through local celebrations.  Was his face horribly distorted like The Phantom of the Opera?  Is this another case of Beauty and the Beast?  Oh, how we long to know all the devilish details of this story!

Pinerolo is rich with Francophonie influence.  Because our French friends had control over the area for many years, Pinerolo became known as “the most French town in Italy.”

If you decide to make your way to Pinerolo via Turin, take the opportunity to explore the city with this guided visit to the historical center.  As you leave the hustle and bustle of Turin and head into the surrounding rural region, you’ll notice the wide expanses of vineyards and sporadic hilltop towns.  Get a real sense for the northern area of Piedmont by exploring the picturesque vineyards and sipping world-class wines.  This guided wine trail is an excellent opportunity to get a lay of the land and geographical context to the village of Pinerolo.  The Pinerolo people, who will warmly welcome you to their town, commemorate their involvement in the strange mystery with an annual procession through the town, as well as with games and activities for locals and visitors alike. 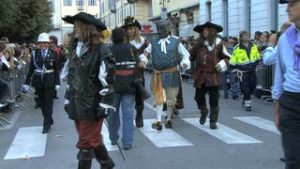 The highlight of the re-enactment is the condemned man’s humiliating march through town.  During the procession, a single villager is dressed and masked to look like the mystery man.  He or she is then led through the city, leaving the thousands of onlookers to speculate which of their fellow Pinerolo residents is hidden in front of them.  Townspeople continue to celebrate, enjoy Italian food and excellent local wines while trying to solve the puzzle of who is hiding behind the mask this year.

If you need to get into the mood and ignite your sense of mystery and adventure, opt for the night tour through Venice.  Northern Italy has a long and colorful history filled with urban legends and mysteries.  This is a guided excursion that is sure to arouse your interest and channel your inner Sherlock Holmes.

So, we’ll save you a comfy seat to discuss conspiracy theories with all our guests.  Bring your creativity and a mask of course, and we’ll have a blast!