The Bargello and Medieval Florence

You don’t have to be a history or art buff to appreciate the medieval ambiance of central Florence, the cradle of the Renaissance, the golden age that rewrote the rules of genius and creativity in every discipline of human life. The splendor of the city has its roots in the Middle Ages, when Florence and its historical families (such as the Medici) strengthened their power, and gave the city the medieval flavor it exudes today. In this newsletter, we offer an itinerary that takes you back in time to discover the mysteries and charms of this world-renowned city. 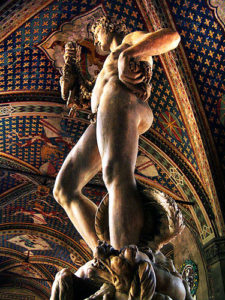 The Bargello, from fortress to prison to museum
Your itinerary starts at the Bargello, celebrating in 2015 the 150th anniversary of the founding of the museum. The austere stone building was built in 1255 as a fortress and arsenal, then became the first public building of the Council – the seat of the Podestà, the chief magistrate of the city.  It underwent many structural changes, becoming larger and more impressive thanks to its beautiful courtyard and monumental staircase. In the 16th century, it became a prison managed by the Police Chief (the Bargello).

The museum was opened in 1865 and has been continually enriched with sculptures from the Florentine Renaissance. These include works by Michelangelo, Cellini, Giambologna, and the absolute masterpiece by Donatello: the David. It features the natural harmony of the first nude in Western culture since the Roman age.

The Medieval Core
The medieval core of Florence is an endless series of palaces and towers, including churches founded at that time, such as Badia Fiorentina close to the Bargello. This Benedictine abbey, restored in 1285 and again in the 17th century, received a Baroque imprint without deleting the frescoes from the 14th century. While on your walking tour, don’t miss the curious Pagliazza Tower, located in the hidden Sant’Elisabetta Square (now part of a hotel). Based on Roman ruins, its original structure is intact.  During its restoration ancient pottery from Montelupo was found, giving rise to an interesting museum. Nearby, you can taste excellent homemade ice cream at Grom (Via delle Oche 24r) or special panini at I Fratellini (Via dei Cimatori, 38R). Just a few steps away you will find the Bell Tower and the Cathedral of Florence, a project the architect Arnolfo di Cambio started in 1296, which has become the symbol of the city. Do not miss it, along with the Baptistery, with an inclusive ticket valid for 24 hours. Keeping to your right, you will reach the Basilica of San Lorenzo, the Cathedral of the city back in the 14th century. Alternatively, take Via dei Calzaiuoli and you will find the Church of Orsanmichele. It has undergone many transformations from its humble beginnings as a wheat marketing and storage facility, later transformed into a church used by Florence’s powerful craft and trade guilds. From the top you can admire a beautiful panorama. ideal for a Monday in Florence when most important museums are closed. 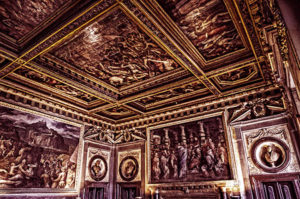 Palazzo Vecchio, the center of power
Behind Orsanmichele, admire the Palazzo dell’Arte della Lana, one of the best-preserved ancient towers downtown, with its “new” 16th century facade. You are now steps away from the center of power of Florence, the Palazzo Vecchio overlooking Piazza della Signoria in the square next to the Uffizi square. Historically called “Palazzo dei Priori” or “Palagio Novo,” Palazzo Vecchio is the best example of 14th century civil architecture in Florence and one of the best known and most visited buildings in the world. In 2015 it celebrated the 150th anniversary of its use as the seat of the Italian Parliament (1865-1871). Today it is the office of the Mayor of Florence, and one of the most important museums in Italy, with magnificent rooms where great artists such as Bronzino, Ghirlandaio, and Vasari worked. Here, you can admire works by Michelangelo, Donatello, and Verrocchio, among others. Its rooms tell of many legends; the Tower of Arnolfo, for example, is where criminals were locked in a small cell before judgment. The palace has a beautiful courtyard and even more impressive rooms, such as the Hall of the Cinquecento (Five hundred). Discover it at your pace: from the Monumental Quarters to the Secret Passages, to the hidden spaces used by the Medici family. This was also the original starting point of the Vasari Corridor, constructed to safely conduct the rulers from the seat of power to their residence at Palazzo Pitti, passing through the “offices,” now known as the Uffizi Gallery.

Palaces, historical streets, and lively cafes
There are many important historical buildings, including several close to Piazza della Signoria. Palazzo Strozzi (behind Piazza della Repubblica, a great stop for its elegant cafes and libraries, as well as the lively Hard Rock Cafe) is home to major art exhibitions. In the nearby Via Porta Rossa is located Palazzo Davanzati housing the curious Museum of the Old Florentine House (great for families with kids) where you can experience a typical Medieval family home. After, take Via Porta Rossa up to Via dei Tornabuoni, where you wind up at Palazzo Ferragamo and one of the best views of the Ponte Vecchio. Then, go back to the inner streets, such as Via delle Terme or Borgo Santi Apostoli. Every house on these narrow, winding streets has a story.  Here you will find craft shops (leather and fashion), gourmet restaurants (such as the excellent Hostaria il Desco in Via delle Terme, 23r), or typical stores such as Bottega dell’Olio. Alternatively, head to the area of ​​the Basilica of Santa Croce (another medieval jewel, not to be missed) following Via Torta with its elliptical shape built on the ancient Roman amphitheater. These are some of our suggestions to discover the Medieval Florence, but if you’d rather be guided try the Complete Medieval and Renaissance Tour of Florence, or discover The Women’s Gallery of the Baptistery of San Giovanni, a masterpiece of the time… or even Legends of Florence, a fun tour of the center that includes stories and myths of the city.